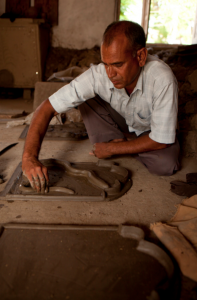 Ishan Khosla is interested in the relation between Aboriginal and Indian cultures. He was drawn to the snake as a common symbol because both cultures associate the snake with their ancestors—the Rainbow Serpent shared by many Aboriginal communities across Australia and the Naga figure of Hindu mythology.

To realise this conjunction, Khosla sought out Jumna Lal Kumhar, who makes terracotta plaques for temple and home decoration in Molela. In his desert region of Rajasthan, the snake is also associated with water, as it is in Aboriginal communities. In representing Naga, Kumhar used the traditional relief form, while for the Rainbow Serpent he applied paint, which in his view was more appropriate to Aboriginal design.

Khosla acknowledges this this dialogue is to be further developed. In particular, it is important to have an active Aboriginal partner. In November, he travelled through central Australia to find a way of realising this dream.