The Kaleidoscope Project is a group from University of Technology Sydney who developed textile works in collaboration with young artisans at Happy Hands, Delhi. 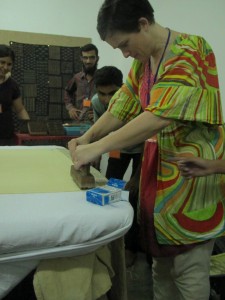 In July 2012, nine 2nd year fashion and textile students from the University of Technology, Sydney (UTS) embarked on a study tour to Delhi, India for three weeks, which was designed to enhance student learning and provide cultural exchange. Australian fashion designer Julie Lantry, who has worked closely with India for over the years and is currently undertaking postgraduate studies at UTS, facilitated the vibrant itinerary.

Over the course of 3 weeks, the students resided at the non-profit organisation Happy Hands Foundation where they were introduced to various traditional techniques by local Indian artisans. These techniques included; Sujuni embroidery, Chickankari embroidery, Ajrak block printing, Bundhani tye dye from Gujarat. On the tour students also had the opportunity to learn about the Indian fashion and textile industry, visit factories and stitching units, charity run schools and orphanages, design studios, galleries, as well as sourcing trips for beads, braids, fabrics and trims from Old Delhi.

The tour was supported by UTS Fashion and Textile Design staff Cecilia Heffer and Alana Clifton-Cunningham. A couple of student quotes from information day….

Joanna: ‘The cultural experiences I have encountered in India have allowed me to grow emotionally and mentally, and it has had an indescribable and enduring impact on me. All I know is that I am definitely going back.’ 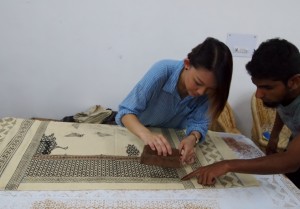 Hannah: ‘Unexpectedly, surprisingly and definitely one of the most incredible places I have had the privilege to explore. India is a window to ancient times with a breathtaking view.’ “I really liked collaborating on the Kaleidoscope project because I had my own ideas and the students got their own ideas and they mixed and it’s sort of a fusion and that now it’s something which I can teach my group of people as well, so I’m excited in that.” Sanju

Rosemary Franco: “The three pieces are based on a landscape image, looking over the V-wall from my home town of Nambucca Heads. The town name NAMBUCCA is derived from the aboriginal word meaning ‘entrance to the waters’, which the image cleary shows of the river flowing into the ocean. The image holds a lot of meaning for me because this is the place that I grew up in, and the area is so beautiful, so I wanted to combine it with another beauty, sujani. Trying to convey my ideas with Sanju Devi (the sujani artisan) was very difficult because she had never previously worked from a photograph and very rarely did landscape images. She usually draws caricatures and images from memory. So actually getting her to grasp what I wanted to achieve was difficult, but once I started working on the fabric, and doing the embroidery she was able to see physically what I wanted to achieve, and she started her own coloured version of the work. 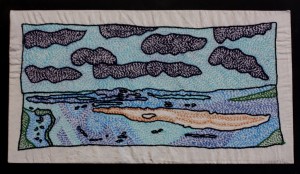 “In the coloured landscape, I dictated to her what the colours should be and then gave her freedom to fill it in and also create her own clouds in the sky. I felt that this piece reflected our working relationship, in that we had many language barriers, but when it came to the embroidery we were able to understand each other through the work we did with our hands. The second landscape, which I worked on, was the plain white fabric with the black and white thread embroidery. This one turned out a lot more different to the piece that Sanju did, just because it was in black and white and not colour, it looked more contemporary. The third landscape is the one that I appliqued black silk organza onto. This is another thing that she doesn’t do, but I wanted to experiment and see how it looked, and I was quite pleased with it. The white silk fabric that I used was a lighter weight silk to what she normally uses also. I think overall she reacted positively to what I was doing because we have had feedback from the NGO that we were working with saying that she has started creating landscapes that have an influence from what I did which is a very humbling notion for me, that I learnt from her, but that she also learnt form me.”

The projects was initiated by Julie Lantry with Cecilia Heffer and hosted by Medhavi Gandhi at Happy Hands.