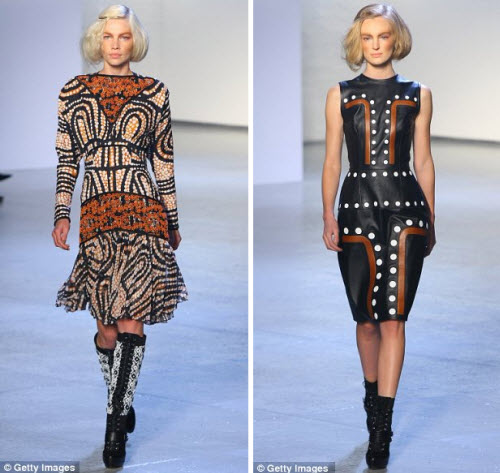 Christian Thompson argues that use of Aboriginal design by high-end fashion studios like Rodarte demonstrates a respect for culture that continues to honour the human form. 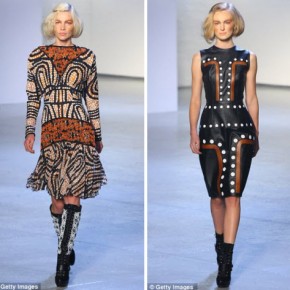 Aboriginal art practices are part of a global economy and the recent collaboration between fashion designers Rodarte and the late Papunya Tula artist Benny Tjangala is testament to the international scope and universal appeal of Australia’s only authentic and original art movement. The California-based self-taught sisters Laura and Kate Mulleavey – the names behind Rodarte – are known for their beautifully tailored garments and uber cool ready to wear collections. Their Fall 2012 collection maintains their reputation as innovators on the world fashion stage, and Rodarte’s collaboration with Tjangala further enhances this notoriety in a sea of structured piete dresses, blouses, high waisted pants, knits and evening gowns.

The fashion industry has always turned to the work of artists for inspiration and Benny Tjangala’s work joins an illustrious list of international artists such as Cy Twombly, Van Gogh, Marina Abramovic, Salvador Dali and Picasso in all having directly inspired major fashion houses and their designers. In a statement first published on fashion news site Fashionista, Rodarte commented on Tjangala’s influence on their new collection: ‘We deeply respect and admire the work of other artists. Through the appropriate channels, we licensed the Aboriginal artwork that influenced prints in our collection. As a result, the artists will share in proceeds of the pieces inspired by their work.’

What we see in this remarkable symbolic convergence of two esteemed forms of high art production is an engagement of performance as a genre that imbues a new sense of cultural providence from both the art and fashion context. On one hand, we have traditional painting from the world’s oldest continuous living culture and on the other, the elite production of wearable couture gracing the New York catwalks.

Traditionally, paintings on bark panels and the body would be utilised in the context of ceremony to pay homage to our ancestral spirits and creation narratives. In the fashion world the adornment of the human body layered with sartorial elegance and opulence celebrates beauty. Both reference the human form as a central site of ritual and inspiration. Tjangala’s designs feature on five of the garments from the Rodarte collection, including two floor length gowns, one with detailed patterning and another with handprints and ruffled details and a fitted sleeveless leather mini dress. In all five outfits, Tjangala’s signature bold patterning is employed discreetly enough so as to maintain artistic integrity, but in a manner that also utilises the vivid impact of his personal aesthetic and his traditional country.

Aboriginal art is a huge industry in Australia, which brings in millions of dollars to our local economy. We are all too familiar with the generic recruitment of Aboriginal art – emblazoned across planes and airline uniforms, tourist shop t-shirts, tea towels and placemats – often in a superfluous and crude manner as a preoccupation with building national identity. This serves as a facade to a country that has been built on a self indulgent mythology of the fair dinkum Aussie battler, peaceful settlement and the thinnest of territorial claims; a shiny veneer veiling much more profound and unresolved issues of nationhood and sovereignty.

Rodarte was attracted to the work of Tjangala on a purely aesthetic level – his use of colour, his valiant brush strokes and the distinctive style of his western desert heritage. The Papunya Tula movement has powered onto the international art scene through the landmark exhibition Papunya Tula, Genesis and Genius, curated by Hetti Perkins at the Art Gallery of New South Wales in Sydney in 2000, and the permanent representation of Tjangala’s countrymen Tommy Watson and Ningurra Napurrula in the interior of Jean Nouvel’s architectural venture in Paris, Musee Du Qaui Branly.

The momentum behind the Papunya Tula art movement is not defined by localised political agendas and discussions. Rodarte’s attraction to the work of Tjangala therefore reinforces the dynamic allure of the Papunya Tula work to international audiences. Despite the criticism surrounding the use of Tjangala’s work by a commercial fashion house, there will evidently be an increased presence of such collaborations, and an ongoing emergence of Aboriginal Australian diaspora in the world.

I contend that these types of consensual collaborations are essential in gaining autonomous recognition and financial independence while also working to transcend the polarisation of the complex multicultural face of modern Aboriginal Australia. Tjangala’s work defies attempts to be drawn into provincial arguments about ownership and returns our art back to its rightful place – as a revered and influential form of contemporary art production. It demonstrates our ability as a culture to adapt and change form and to find creative and exciting platforms to share our experience and culture with the world, thus contributing to a global discourse.

Christian Thompson is a contemporary artist and currently Inaugural Charlie Perkins Scholar at Oxford University. This was originally published in the Australian Design Review.