Carolyn Wilson has created a remarkable path between Australia and India, finding a way to jointly promote cultural sustainability of Kashmiri artisans and Aboriginal communities. This unusual but successful conjunction arose partly from answering the call of a friend, twice.

Carolyn is the founder of Better World Arts, an organisation that paved new paths for design collaboration, linking Australian Aboriginal painting with Indian weaving. Better World Arts arose from Carolyn’s experience as a tourist in northern India. In 1992, she was meeting up with a friend in the Kashmir. Responding to a telegram, she ventured off to Kashmir, but by the time she arrived, her friend had left. She stayed on and took a houseboat, as seemed the custom. Besides being impressed by the handicrafts, Carolyn was particularly taken with the Kashmiri sense of humour—‘I spent my whole time there laughing.’

It was a life-changing experience. She’d trained as a painter, but now found her own pursuit of art to be a ‘waste of time’. ‘My work wasn’t linked to anything of great significance.’ She decided instead to engage with Indian crafts and started importing rugs. It wasn’t easy. There weren’t many retail outlets in Adelaide and ‘Indian handicraft had been done to death.’

She’d found a Kashmiri family who had a long history of working in handicrafts. The Sidiqs had started the business three generations back to provide outlets for local crafts. So she started sending her designs over to Kashmir to be woven, which proved much more sellable than original works. 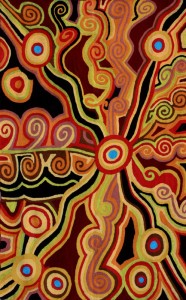 Then in 1996 a friend went to work at Kaltjiti Arts, located at Fregon in the Anangu Pitjantjatjara/Yankunytjatjara Lands (APY Lands) about 200k south of Uluru. She showed her the rugs, and asked if there was potential to work together. It looked promising and they were successful in getting a $5,000 grant from ATSIC to order four designs in two different sizes.

There were problems of translation—of design, not language. The myriad of dots that characterises central Australian Aboriginal painting was problematic for weavers, and she learnt to be quite selective in the paintings she sent for production.

There were plenty of heartaches in the early days. Carolyn had to live mistakes in translation. Sometimes a whole shipment would have the wrong colours. ‘Many a time I would sink in a pile of rugs in despair.’ They used to say sometimes that the dyer was depressed. Colour charts were used to ensure these mistakes did not happen again. Over time quality control over issues like colour improved.

Carolyn likes to keep business informal, based on a handshake. She sends a half-payment with the order, and pays the rest when the work is finished, plus freight and duty. She now tries to travel at least once a year to the Kashmir in order to check quality control and maintain the personal relationships on which her business is based. The best time for orders is between sewing and harvesting. It takes about eight months to have rugs chain-stitched and provides for work for about 60 artisans.

Carolyn is a real pathfinder. As she says, ‘There was no model for me to follow.’ Her business is the result of much trial and error. Looking back over her journey, she acknowledges some missteps: she feels could have been more aggressive in pursuing opportunities, particularly with Aboriginal Arts Centres.

For Better World Artsto succeed, she had to convince people of the value of ‘Aboriginal-derivative products’. ‘When we first started, I had to fight for that.’ She feels this is particularly important for the majority of the communities, who don’t have the same access to the art market. This way combines both cultures. ‘They don’t have a manufacturing culture.’

Now with a great amount of hard work and commitment from staff at Better World Arts, she has opened a space next door to her office in Port Adelaide as a base for Ngura Wiru Wingkiku Arts, which includes the Anangu people who have come down from the desert to live in the city. She is keen to provide work that connects with their culture, and a number of non-financial projects are supported to facilitate this.

But it’s very important that she continues to support the traditional lifestyles of weavers in the Kashmir. ‘We like to support people in their traditional place.’ She is dismayed by the conditions in larger cities like Delhi—‘The sky’s yellow. You wouldn’t want to live there.’

She resists any move towards machine technology. Suppliers have offered her cheaper factor-made goods, but she refused. ‘I said no, I’d prefer to find a way of continuing working with handmade.’ She is currently exploring potential for moving her screen-printing operation to the Kashmir in partnership with the local community.

The model has proven a success. Better World Artshas been feted with many awards. It has even been called ‘the Body Shop of Aboriginal Art in Australia.’ The work continues to sell, even in the current downturn. What’s particularly important to Carolyn is the response of the Aboriginal artists when they seem some of their culture going into someone’s home. ‘Every sale is a little step towards reconciliation.’

The model has been extended to include Peruvian jewellers and Tibetan artisans, and most recently leather workers in West Bengal using the revived Shantiniketan printing process —all producing Aboriginal-derived handmade product for the Australian market.

In the future, she is interested in potential creative dialogue between the Aboriginal painters and the artisans who make the products.

Better World Arts represents a particularly productive design partnership between Australia and India. Aboriginal communities provide the designs and stories that appeal to the Australian market. And the Kashmiri artisans find regular work in providing these products with a handmade quality that enlivens the designs. It’s been a path of great risk and much disappointment. But it’s testament to the value of following your inner values—and responding to a friend in need.