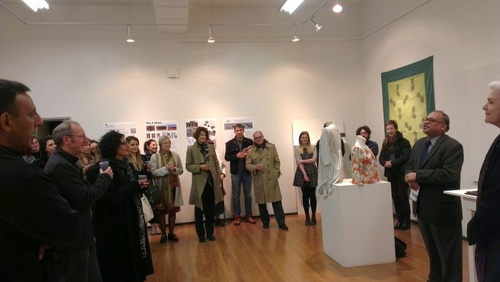 For me she will always remain the colours of the peacock’s feather: brilliant, distinct and yet, no colour can be separated from the other for they are interwoven like magic. She is not the mosaic or the melting pot. She is the Divine Peacock. She is the Perennial Tree that gives shelter but with roots above and branches below. She is mystery and allure. She is home. She is the contemporary and the classical, the modern and the traditional. She is change and continuity. She is the eternal here and now. She is you. She is me. She is everybody. She is the journey to the soul. Her name is India.

Jugalbandi 1 is the start of a particular conversation between Australia and India. We talk about mutual interests and differences of opinion. But more than a meeting of two discrete cultures, Jugalbandi is also about the nature of cultural dialogue, particularly collaboration.

The word ‘jugalbandi’ itself comes from a term for a musical dialogue between two performers, often from different traditions, such as Hindustani and Karnatic. It celebrates the cultural diversity within India that is a source of its strength as a modern nation, like Amit Dasgupta’s image of the peacock’s tail. The word literally means ‘entwined twin’. As a dialogical concept, it suggests an understanding that no culture is sufficient to itself.

In the pre-history of Gondwana, India and Australia were once physically connected in a single landmass. The challenge of this exhibition is to think how they might re-connect culturally. What kind of exchange might bring Australia and India closer together again?

Since the 1970s, many Australians have been travelling to India to seek alternative values. Among these have been craftspersons exploring the rich traditions that Indian offers. According to the latest figures, India now represents the highest source of migration to Australia.

So what do the two cultures have to say to each other? Judging from the first fruits, Australia seems placed in the role of patron, seeking to support the fragile future of India’s skilled artisans.
Without denigrating this intention, now is the opportunity to look a little closer at this arrangement. Why should Australia care? What stake might one culture have in the survival of another’s traditions?

No doubt there are practical motives. Indian craftsmanship offers a capacity for Australians to have designs produced that are both affordable and beautifully handmade. In return, Australia offers a space for possibility where the handmade is prized as a rare quality. As this conversation develops, there is the opportunity to hear from Indians directly. What do they find are the creative qualities that distinguish Australia from other Western countries?

And eventually this conversation may touch on the deeper connections. How does India fill the gaps that exist in Australian culture, and vice versa? As no culture is sufficient to itself, we turn to the world in order to trade our differences.

See Jugalbandi 1, featuring staff and alumni of COFA UNSW who have worked in India: