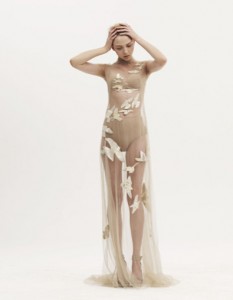 In 2012 Ashok collaborated with Australian designer Michelle Jank on a couture gown. It was Michelle’s first visit to India and she took her inspiration from an old sample (below left) and gave the design to Ashok to recreate onto net using similar techniques.

Ashok Ladiwal is a fifth generation embroidery artisan. He has inherited the tradition of embroidering clothes and backdrops not only for the Krishna deities of the pilgrimage town of Vrindavan where he resides, but for many other major temples in India and abroad in Mauritius, Italy and the US. The collaboration was part of a project Artisans of Fashion, which promoted the contribution of Indian craft to the fashion industry in Australia. Their meeting was facilitated by Australian photographer Robyn Beeche, who lives in Vrindavan.

Michelle Jank completed her final year of fashion design at Sydney Institute of Technology in 1999. Since then she has had several solo shows at Mercedes Australian Fashion Week, shown at New York Fashion Week and styled fashion shoots for Vogue Australia and catwalk shows for various Australian designers. She calls herself a magpie collector, seeking out jewellery, laces and textiles in antique and second-hand shops. Delighting in their beauty and rich history these collected treasures form the starting point for Jank’s designs. She collages, layers and hand stitches her found pieces into garments whose rich textures, visual appeal and mysterious and evocative past make them exclusive and treasured pieces.

Master embroider Ashok Ladiwal discusses the nature of his collaboration with fashion designer Michelle Jank. He reflects on some of the challenges, such as the relatively formlessness of the birds and the immodest absence of undergarment. In the end, he states how much he enjoys such challenges