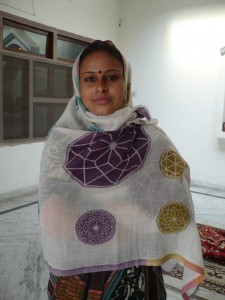 Sara Thorn Jewel scarf-takes its inspiration from Jewels. Jaipur and its gem cutting tradition are of great inspiration to me. This jewel scarf represents jewel cuts ,which create patterns that remind me of sacred Yantra patterns. The scarf is woven in Australian Merino wool on a computer jacquard loom in Amritsar in North India. It represents a fusion of handmade and technology.

Since 1983, Sara Thorn has been working as a textile designer. After several successful studios and labels in Melbourne, she took up the position of head designer at Stussy Sista, a sister brand to the iconic Stussy brand from California in 1995. She then moved to Europe where she designed textiles for Christian Lacroix in Paris, Michiko Koshino and Scottish tartans for Bella Freud in London in 1997/8. On her return to Australia she became the creative director of the Sydney Fashion Week in 2000. 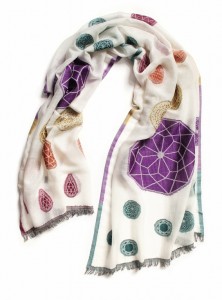 Thorn’s passion for sensual expression with historical resonances had taken her to key centres of fashion and design around the world. But it was India that increasingly took Thorn’s interest. Her first trip to India was in 1987, where she spent six weeks travelling alone, discovering the beauty of textiles. She remembers being particularly impressed by the Tibetan brocade weavers in Banaras. Thorn is a regular visitor to India. As well as her own range, she is currently working doing design and production consultancy for other companies and currently designing collections of rugs and interior products for WorldWeave.