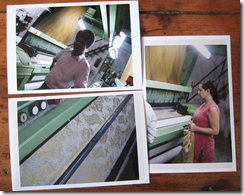 Melbourne artist/textile designer Sara Thorn is a remarkable combination of artistic passion and hard-headed business mind. While she travels to India following her heart, she’s capable of dispelling illusions in recognition of the real world. As a pathfinder, she has learnt to follow her heart, but at the same time keep an eye on the compass.

Sara Thorn grew up in a creative hub. Her Spanish mother introduced her to textiles, particularly traditional embroideries. Largely self-taught, Thorn started her first business in 1983 in Melbourne as a independent fashion and textile designer. From the very start, she had a fascination for textile history. Her prints reflected decorative arts history juxtaposed with contemporary images, combining historical motifs such as the Napoleonic bee with robot heads.

Her career quickly took off. After several successful studios and labels in Melbourne, she took up the position of head designer at Stussy Sista, a sister brand to the iconic Stussy brand from California in 1995. She then moved to Europe where she designed textiles for Christian Lacroix in Paris, Michiko Koshino and Scottish tartans for Bella Freud in London in 1997/8. On her return to Australia she became the creative director of the Sydney Fashion Week in 2000.

Thorn’s passion for sensual expression with historical resonances had taken her to key centres of fashion and design around the world. But it was India that increasingly took Thorn’s interest. Her first trip to India was in 1987, where she spent six weeks travelling alone, discovering the beauty of textiles. She remembers being particularly impressed by the Tibetan brocade weavers in Banaras. 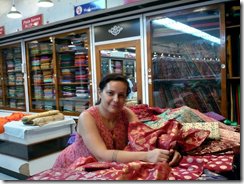 Sara Thorn returned to India in 2001where she had the opportunity to share her knowledge. She attended a symposium on embroidery in Hyderabad and learnt of the great diversity of traditional textiles in India and Asia from the artisans and historians. There she was introduced to a global network of those working with traditional textiles, such as Edric Ong from the World Craft Council – ‘Destiny called. It made feel that this was a path I wanted to pursue’.

She taught a workshop in textiles at the National Institute of Design in Ahmedabad where she was impressed with the seriousness of the students. ‘I’d critique their work and they would come back with five designs that they’d stayed up all night to do. They were a lot more motivated than the students I had taught in Australia and their energy really inspired me.’ She just managed to visit artisans in Bhuj before the tragic earthquake struck and she was just able to get out in time while on campus at NID.

She made some orders from that trip, but there were problems with quality and translation of ideas. From this experience, she learned the importance of extending traditional skills and how to communicate her ideas more effectively to collaborate with artisans

They [the samples] looked cheap even though they had a lot of hand work, they were too similar in appearance to other cheaper Indian products on the market and that was detrimental to their value.. If I used artisanal skills, I needed to be careful that I included my own design, colours, inspiration otherwise it looks as if I’m using someone else’s ideas that already exist, and why would I do that?

Thorn’s engagement with India is underpinned by her commitment to her Tantric yoga path. She believes that this gives her a deeper connection with Indian culture. ‘India for me is not just about artisans and textiles, it’s about spirituality.’

At the same time, she’s aware that her designs can conflict with traditional values:

I love to explore female sexuality in my work, to work with the female silhouette and the power of Goddess imagery. As I live in the West and it is so much less traditional, its easy to get wires crossed. In India People might be comfortable with images of a half-naked Kali with her foot on Shiva, , but perhaps not so interested in embroidering a half-naked, topless female sailor as part of my scarf design. Women from rural areas around Kolkata refused to embroider it. I didn’t expect that reaction. I had no idea. so I said sorry and learnt more about cultural differences, I respect their values.

Thorn continues to pursue her education in Indian culture and is currently studying Sanskrit.

Thorn doesn’t underestimate artisans’ willingness to take on new designs. ‘People working in traditional techniques don’t want to stagnate. They want to extend their ideas and traditions.’ She’s also aware of the problems in committing artisans to new techniques. She was initially interested in commissioning silk brocade sari weavers from Banaras:

What made me hesitant to work with traditional Banaras silk weavers was I didn’t want to compromise a weaver’s already established work. Through some research I became aware that there is a whole complex system of production .Though the weavers are Muslim men, it’s the Hindu middle man who brings the cloth to market. If I wanted to develop a scarf length instead of a traditional sari length, the weavers would need to change the width of their loom. Say, for instance, I don’t want a pallu (pattern) on the end of selvage. I am changing the way they weave. It’s costing them time and money to develop a new idea. Say the scarves bomb, and I can’t go back and revisit the concept. The weavers may have compromised their immediate livelihood by doing my work as it’s not going to be ongoing at this stage – and possibly compromised their connection with the middle person. This has not happened to me, but I’ve heard of it happening to others. 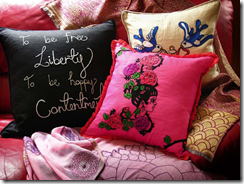 In 2004 Thorn returned to India, focussing on the south. She gave a series of design workshops to empower the master handloom weavers across Tamil Nadu and in Kerala to be creative and confident to design their own textiles again. Their skill had been diminished due to only weaving commission designs. The idea was for the actual master hand loom weavers to create designs they could directly sell to Western markets rather than relying on orders from middle men. The workshops focused on explaining how to read trends, creating colour palettes in order to design for the Western market. There seemed a strong need for this information as they had little familiarity with Western lifestyles and what the end use of their work was used for. ‘They were making table mats. One man put up his hand and asked, “Madam, what are these for?”’

During this time, Thorn learnt some key principles in working with Indian artisans:

You need to respect a person’s lifestyle and priorities and give them work and delivery dates that both of you agree are going to work for both of you. You need to take the time to get to know the person/business you are working with and communicate very clearly. You should never assume anything. The India mind works differently to the Western mind. You need to have very long conversations, where you both confirm the same things. And it is very important in my opinion that you need have good technical knowledge and for me it works that I also study, research and have a great interest in traditional Indian textile techniques.

The more questions I ask, the better the result is. Otherwise decisions will be made for you. Which can be great, but it can backfire. If you have money invested in project, it can really go wrong. You need to go in with eyes open and a lot of patience.

Her skill and familiarity with textiles gives Thorn a common base of understanding on which to build relationships with artisans. 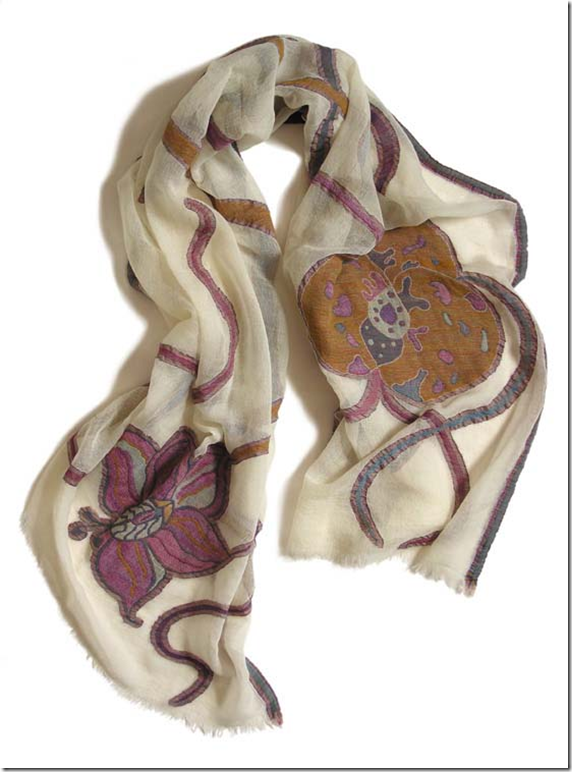 Getting down to business

At this time, Thorn decided that it was sometimes better to work with the emerging craft factories in cities centres rather than traditional village artisans. ‘I decided it was no longer appropriate to work with artisans that are connected to their land and ritual and expect them to conform into my time /production zone.’

In 2008, Sara Thorn started the company WorldWeave with architect Piero Gesualdi. She went to India for two and a half months to design and develop the first collection.. The possibilities of textile manufacture were a revelation. She found a scarf manufacturer that makes for Giorgio Armani in Europe and factories offering 6-8 weeks production turnaround produced at the highest quality.

She ended up working with a company that specialised in the traditional ari embroidery stitch. Though the process was machine embroidery, Thorn considered the results equivalent to handmade:

They have antiquated machines that are guided by hand. There is still a person who is guiding machines and interprets the design. I do a lot of faces in my work. Out of ten cushions, each one has a different face. You could argue that a needle is a machine. Whether it’s in your hand or in a machine is a small difference. While I could justify something being hand-embroidered, the price for this work has gone up. I have to produce products at a certain price point. It couldn’t be a super-luxury item, because that’s not able to sell in Australia. It I had it hand-embroidered in Kashmir, it would have taken five months. It would have been farmed out to villages, transported overland and quite unpredictable.

The alternative for a designer like Thorn is to have her concepts realised by manufacture in China. But Thorn prefers to produce in India: ‘I wanted to support Indian business and tradition because it’s a democratic country.’

Thorn is just about to set off to India for a three month trip when she’ll go back down south. She has learnt a lot about the limits of collaboration in India, but her enthusiasm for working there has only increased. ‘There’s nothing about what can be produced out of India which I find dull and boring. There are limitless possibilities.’

Sara Thorn is re-launching her own line of limited edition homewares, jewellery and scarves under her name Sara Thorn and currently working doing design and production consultancy for other companies and currently designing collections of rugs and interior products for WorldWeave..