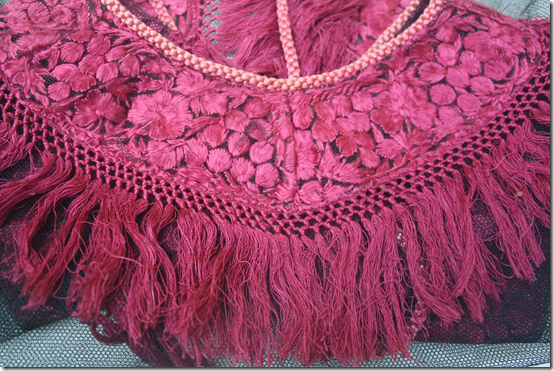 Questions arise followed by a gasp of astonishment when one confronts a gigantic wall-hanging comprising European design minutely embroidered in Indian chain stitch so as to simulate printed design. This encounter with a late seventeenth century piece of textile craft at the Calico museum is what led me to investigate European adaptation of traditional Indian embroideries, surrounding garment finds in British museums dating from mid-nineteenth to early twentieth century. While scholars like John Irwin, Rosemary Crill and a few others have so far done extensive research on shawls, the chintz and the Anglo-Indian trade in general, the study of cross-cultural aspects in consumption of clothing is believed to have been far less touched upon.

My research follows a material cultural approach entailing object based analysis. David Howes states that ‘the process of re-contextualization whereby foreign goods are assigned meanings and uses by the culture of reception may be termed “hybridization.”[1] Based on this theory, my thesis analyses how meanings and values associated with traditional textile craft like hand embroidery are culturally reconstructed when imbibed on an object from a different culture. The study of extant garments has revealed interesting aspects of hybridity in the clothing fashions and textile designs of the period which can inspire many contemporary designers, students and other professionals. Besides serving as an inspiration in design, it most importantly sheds light on commercial production and consumption of embroideries in the imperial context. 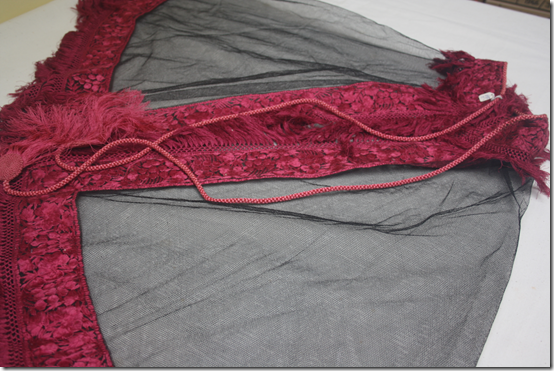 This image for example is that of a black netted cape with crimson floss-silk embroidery. It was one of the distinct varieties of regional embroideries (now extinct) produced in parts of North India especially for the European market. Unfortunately today there are several limiting factors in reviving a craft such as this in its entirety for middle class consumers. Some of these include high cost of productivity, scarcity of skilled artisans and lack of patronage. Kamaladevi Chattopadhyay remarks that ‘with the advent of cheap alloys for jewellery, artificial silk and synthetic stuff like plastic, the emphasis has definitely shifted to cheapness’.[2] Embellishment of articles with a lustrous diaper pattern using silk floss thread would perhaps be perceived in the modern day as an extravagant exercise and rayon is most likely to be worked out as a synthetic alternative. At present the application of this technique may only be a prerogative of designers of high fashion. But it is definitely worth considering how this craft can first be revived on a small scale and then brought within the realm of mass production. Can this be achieved with the help of technological support? …And if yes, then to what extent?

Seeds sown in the past can provide fertile grounds for germinating new ideas for effective preservation of crafts at present. My reflection upon the origins of commercialization on the craft of Indian embroidery in this research has yielded that British domination over Indian production of hand embroideries was a strategic accomplishment, the first step of which involved identifying and estimating the overall wealth of Indian handicrafts by acquiring information.

To put a similar policy in practice today may seem fanciful at one instance. But a radical venture undertaken by a non-governmental organization reflects an analogous implementation of this idea in the modern context. Cristin McKnight Sethi, a researcher at University of California, Berkley has identified a contemporary initiative by the Dastakari Haat Samiti who in collaboration with local artisans mapped, identified, geographically categorized Indian handicrafts and created a unique niche for the artisans to showcase their expertise[3]. The remarkable visible outcome is now widely recognized as Dilli Haat, a commercial space where artisans can directly exhibit their products to the consumer without having to reach out through middlemen.

Every craft is rooted in tradition. It therefore becomes necessary to ask questions like ‘What traditions?’, ‘Of Whom?’ and ‘How did they come to exist in the first place?’ Enquiry into the tradition of a certain kind of embroidery entails an in-depth understanding of the context and circumstances which shaped that tradition. Skilled human resources are already at present being identified at every level, tapped and harnessed with contemporary practices of active governmental, non-governmental organizations entrepreneurs and collaborative projects. Another way of achieving this could be for instance, by spotting extinct/endangered handcrafting techniques, determine the regional style, recognize the respective source communities and encourage their revival through increasing number of community engagement projects and progressive initiatives with the help of museums, thus ensuring sustainable craft and design practice.

Pallavi Patke is a graduate in textile design from NIFT, India and currently a full-time graduating student on MA History of Design and Material Culture course at the University of Brighton, UK and this research is a part of her ongoing dissertation.