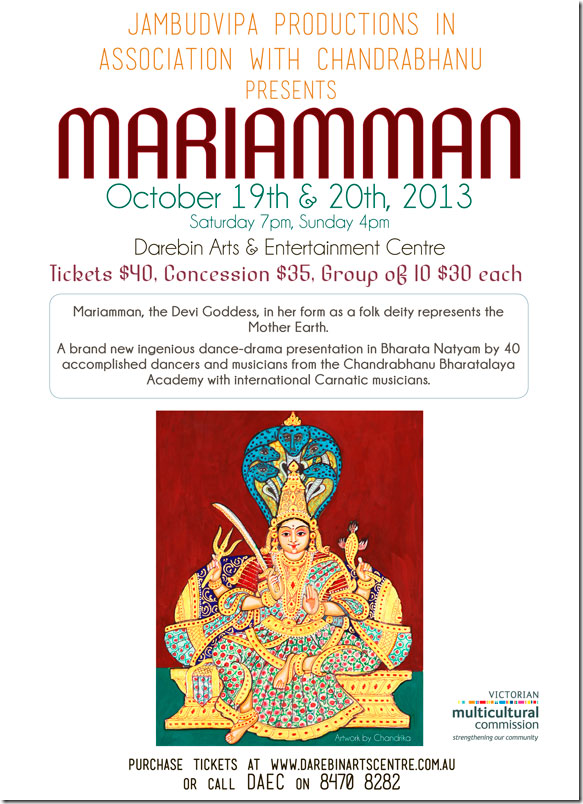 The cultural dialogue between Australia and India continues to grow. Below is notice of a group called Jambudvipa, which seeks to invigorate young Australians involved in the Indian arts to work together and combine creative forces to propagate it, and at the same time work within the different cultural spaces. They are open to future collaborations.

Essentially, this particular production portrays the goddess Mariamman, known as ‘the goddess for all people’. A symbol of women’s empowerment and equal rights, Mariamman is an icon of human rights. As the goddess of land and terrain, the story of Mariamman will aim to highlight the importance of environmental consciousness during a time of climate change, and as the goddess of diseases, will emphasise the need for health and well-being and caring for one another. The festival will also pay homage to four other key goddesses in the Hindu pantheon: Durga, the warrior goddess of protection and justice; Lakshmi, the goddess of fertility, the earth and auspiciousness; Saraswati, the goddess of knowledge and the arts; and Kali, the goddess of eternal time and change. This production aims to show that the themes of these goddesses are universal and can be shared by people from all walks of life.

Mariamman will be performed upon the conclusion of the Hindu Festival of Navratri – ‘nine nights’ – held for the worship of all goddess forms in the Hindu pantheon, on October 19th and 20th at 7pm and 4pm at the Darebin Arts and Entertainment Centre. Tickets are $40 full/ $35 concession/ $30 for groups of 10 or more, and can be purchased via www.darebinartscentre.com  or through the box office on 03 8470 8282.

Mariamman is presented by Jambudvipa Productions in association with the Chandrabhanu Bharatalaya Academy. This production is sponsored by the Victorian Multicultural Commission.   For further enquiries contact Nithya Iyer, 0403 495 558, [email protected]