As a craft, batik seems quintessentially Indonesian. After a dispute with Malaysia about its origin, UNESCO in 2009 officially recognised batik as part of Indonesia’s Intangible Cultural Heritage. To celebrate, President Yudhoyono declared 2 October to be batik day, and called on all Indonesians to wear their national costume with pride every Friday. This proved a great boon to the batik industry, introducing the textile tradition to a new generation.

According to the UNESCO decision, batik ‘provides Indonesian people with a sense of identity and continuity as an essential component of their life from birth to death’. Is it possible for a craft that is so tied to national identity to be shared with another culture? This of the Scots and their tartan kilts. No other culture than the Scots would wear or make authentic tartan. Would another culture dare to engage with batik?

With globalisation, we see increasing numbers of foreign designers involved in product development. For the last three years, the Sangam Project has been making connections between designers and artisans in Australia and India. This year the platform extends to Indonesia, beginning with a focus on batik. 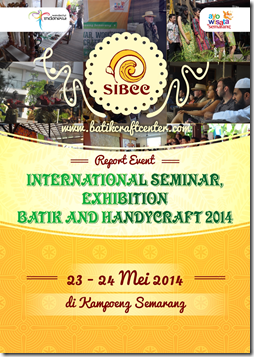 Following last year’s International Batik Festival in Semarang, we developed a workshop on 23-24 May 2014 to explore the benefits and obstacles in designer partnerships, particularly those using the new e-commerce platforms. This involved quite intense design feedback, as local Indonesian producers of textiles, fashion, accessories and gifts were quite hungry for a critical assessment of their suitability in the Western market.

The export conference began with an enchanting batik traditional dance, followed by the first of many fashion parades. The combination of fluid traditional dance form and the formalised moves of Western fashion showed how batik can bridge quite wide cultural difference in Indonesia. The following discussion following brought up many important issues. The audience seemed eager to learn about the new e-commerce platforms, though the issue of online purchasing seemed an important matter to resolve. Rather than use credit cards, it seems many Indonesians use a bank transfer system through ATMs, which is negotiated informally through networks such as Instagram. The financial connectors for craft e-commerce Indonesia require more research.

The capacity for design partnerships was demonstrated in a visit to Batik Semarang workshop. Marvelling at the number of caps (copper stamps), designer Sara Thorn made a selection of five stamps and ordered a fabric made from them in a light blue. Two days later, the sample was delivered to her hotel. The visitors were all thrilled not only with the sample but also the ease of production.

After Semarang, the designers travelled along the north coast of Java to Pekalongan, which accounts for around 60% of Indonesia’s total batik production. Visits to its workshops amazed everyone with the diversity of materials, techniques and designs. They were welcoming and eager for commissions. Many had not recovered to the production levels that were maintained before the 1998 crisis.

The batik infrastructure in Pekalongan was quite impressive. The Batik Museum offered visitors a broad sample of batik from Indonesia’s regions. Even more impressive was the development of Fakultas Batik, Universitas Pekalongan, under the leadership of Zahir Widadi. This education unit offers many opportunities for education exchange. This is quite timely given the strong interest from Australian universities, particularly Sydney’s COFA and RMIT and Swinburne Universities in Melbourne. Finally, on the other side of town, the International Batik Centre is an impressive complex of shows, eateries and showroom. This would be the perfect setting a major exhibition of contemporary batik.

There were some serious issues to consider alongside the sumptuous textiles. First, traditional batik is quite labour intensive, and many workshop owners were concerned that younger workers are not attracted to the craft, preferring the more formal employment opportunities available in factory work. There seems an urgent need to formalise the batik sector and improve conditions for workers.

Second, there were some amazing artists making singularly impressive batik masterpieces. These art works are 3-4 metres in length and take more than a year each to produce. Demand from Jakarta collectors is stimulating the production of ambitious works in batik, but they leave Pekalongan undocumented. There were no photographs of the art works produced in Pekalongan, losing a valuable opportunity to promote the medium and individual artists.

Many foreign companies are re-locating their production to Indonesia because of low labour costs. These offer good employment opportunities, but they are likely to move elsewhere once wages improve. By contrast, the benefits in craft partnerships are more long-term. Drawing on traditional meanings of batik helps increase its price for a foreign market, which allows for improvement in working conditions. This is more a joint ethical partnership than a race to the bottom.

It seemed foreign designers could play a productive role in boosting the batik sector. But this does involve some adaptation. A common theme was the need to simplify designs for the Western market. Local designs featured many colours and dense patterns, which the Westerners sought to reduce, sometimes leaving blank spaces. Brisbane fashion designer Carla van Lunn was very positive: ‘This trip was an inspiring introduction to the batik of central Java that will influence my design teaching and my own creative fashion work …I hope to return to Indonesia soon!’ Sara Thorn from Melbourne is eager to start: ‘I now have a introduction into batik and have made connections and relationships to start working with this technique in my collections.’

One way of engaging a foreign market is to enhance the meaning of the products. Javanese batik is remarkable for the way it envelops human life, featuring in major rites of passage that mark a human life. There is even a tedak siten batik to put on the floor as the child makes its first steps. Product development need not just be a matter of adapting to different visual tastes. It can also involve the translation of the stories and rituals that give meaning to other cultures. The West has given many of its traditions to other cultures, such as Christmas and Valentine’s Day. There’s no reason why it can’t receive traditions from the East in return.

The welcome and openness of the Indonesians to partnerships in batik was particularly remarkable. It evoked the scene in the 1994 APEC meeting in Bogor, where world leaders were welcomed with colourful batik shirts.
While batik seems as Indonesian as nasi goreng or gamelan, they appear eager to share their treasure with the rest of the world. We should continue to honour this gift.