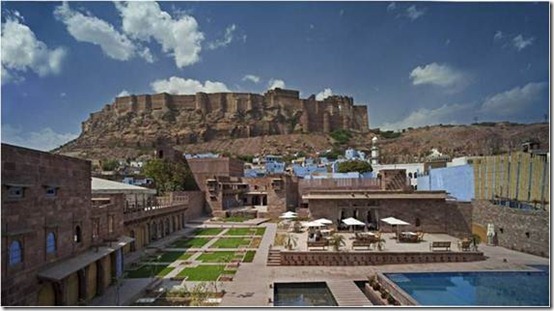 The phrase ‘ancient futures’ suggests an interesting way forward. Recent trends in the interior architecture and design field (few illustrative examples are discussed in the latter part of this essay) indicate a growing concern to find the perfect balance between the ideologies of the past and the needs of the future. The quest is to combine past and future in a way that is relevant to the present. This leads to an interest in the crafts as an area of ancient expertise and the challenge of adapting it to the contemporary.

When I look at architecture books, journals or magazines, a dilemma comes to my mind: what are we trying to project here, particularly in the case of India? The architect’s signature buildings which follow the modern or contemporary idiom are already a major feature in the glossy magazines published across the world. Then I ask a question, where are we leading towards? What our futures will be like? Will there be something like traditional or modern? I reflect upon Indian interior architecture scenario today and see how the futures are being projected. 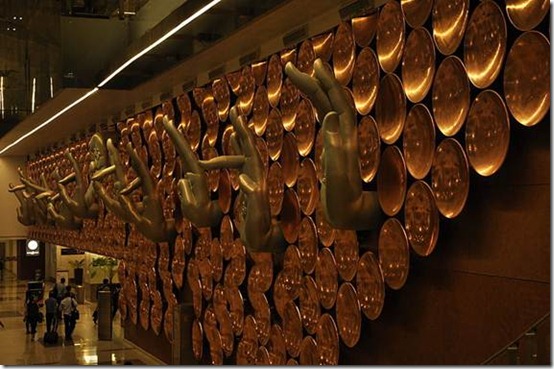 Over the long history of civilization, different people and cultures invaded, conquered, destroyed and rebuilt India. The people had always exhibited a cultural elasticity which assimilated new cultures by merging them into existing cultural frameworks. With the advent of various invasions, the architectural practice evolved over time. With changed environments, advancement of technology and the new modes of construction, there also exists a parallel desire for continuity of tradition in some way or the other. One example worth mentioning here is the Indira Gandhi International Airport at New Delhi redesigned under the theme ‘Expressive India’. With a world class hi-tech infrastructure, it exhibits ingeniously traditional installations such as the ‘Nine Mudras’ inspired from the hand gestures of traditional Chollasculptures. Initially made by hand in clay by craftsmen, it was converted in a plaster mould which later was cast using resin. The discs behind it are made of copper coated spun aluminium. One is amazed to witness such a seamless amalgamation of modernism and heritage. 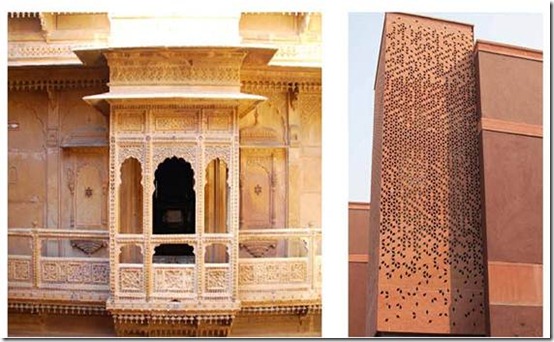 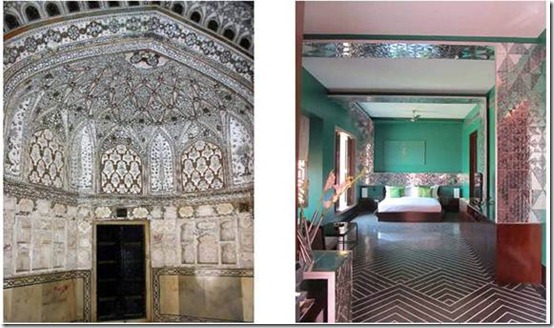 Recent interior architecture practices in India are initiating many debates exploring issues that concern the dynamism of present, new ways of thinking for the future, and learning from the past. Exemplifying this is Devi Ratn, a Boutique Hotel designed by Ar. Aniket Bhagwat and Interior Designer Pronit Nath. Located on the suburbs of Jaipur, capital city of Rajasthan, it takes inspiration from the stone Jharokhas of traditional Rajasthaniresidences and reinterprets it with a new language of ornamentation and material palette. Not only are the traditional forms and techniques abstracted, but also the scale is transformed giving a new imagery to the crafts (especially stone crafts and mirror work here). Such examples show how elements from the traditional architecture of India are being reinterpreted and transformed to achieve projection of future which is rooted in its culture, yet is modern enough to be placed in league of contemporary buildings. We live in three worlds today – the past, the present and the future. In particular, large parts of Asia are re-inventing ancient ideologies, hoping for sustainability while fighting with the contemporary idiom. I here mainly refer to the interior architecture scenario in India today. There is an urge to create a new language that combines past and present.

One interesting example which portrays three projections of past, present and future together in a single project is the boutique hotel, Raas, located in Jodhpur. Designed by Ambrish Arora, this building was declared the Best Holiday Building at the 2011 World Architecture Festival and was chosen as one of the best hotels in the world by Conde Nast traveller for The Gold List 2011. On discussing, he shares his experience about the project,

we feel the world is moving towards authenticity. Today, resorts are creating theatre stages of the past which is a pseudo revivalist movement. It’s not about packaging something; it’s about expressing what is relevant today. And how can we give back, to the people what is theirs. So you get a relevance to what they have… the new framing the old and the old framing the new

Such approaches taken by designers give an idea of how architectural design practices are marching ahead. Deeply rooted within the cultural framework and Indian context, the projection becomes a future reinvented with the ancient knowledge and design idioms.

As we progress, the beliefs in tradition change, so do the living patterns and lifestyles. It becomes necessary to re-evaluate and try to reposition them. Many professionals have been advocating this fact. Uttam Chand, a practising Indian architect, when asked about the Contemporary relevance of crafts mentions,

Industrialisation has affected many fields and architecture too has not been left behind. The ‘technology’ driven world with the new innovations and interventions from various fields, architecture and design has been deeply affected with such processes. The role of new interactive and digital media has also contributed in different ways which one cannot neglect. The skills of hand, though deeply valued, have been recently needed to argue for their continuing relevance. In one of her research papers, conservation architect Dr. Shikha Jain, who has been working with the craft sector in India since long discusses,

the crafts sector of India that is currently facing a loss of craftsmanship and identity needs to redefine itself in the contemporary scenario for building applications. The aim of such a venture needs to be a multi-levelled approach and aim at the revival of the crafts, training of crafts person’s along with a definitive purpose of creating a special market for the varied craft forms across India.

India, as aforementioned, has always grown out of the interweaving of many societies, many pasts, many communities, and many cultures which has made her a pluralistic landscape. This is reflected in the term ‘Ancient Futures’, coined by Romi Khosla. Khosla is a well-known architect and an architectural critic; educated at Cambridge University, UK and the Architectural Association, London. In his book ‘Loneliness of a long distant future: dilemmas of contemporary architecture’, he mentions two different projections of future that he calls ‘Abstract Futures’ and ‘Ancient Futures’. Two different perceptions of time and future can be observed in the global world today, one in which there is an abstraction of modern ideas that is disconnected from the past; the other rejects the modern ethos and increasingly advocates for the heritage of traditions, beliefs, proportioning systems (based on shilpashastra in Indian context) and modes of construction used in the vernacular structures across.

In the case of India, both these theories have dominated to some extent. The presence of high rise buildings in New Delhi, Mumbai, Bangalore and many other cities gives one good example of the modernism movement in India, which projects an idea of abstract futures. Whilst among many other buildings, few examples worth mentioning here are Udai Villas in Udaipur by Ar. Nimish Patel, Bamboo Symphony in Bangalore by Neelam Manjunath, Devi Art Foundation in New Delhi, which prefer the indigenous working methods and position themselves parallel to all modern, minimalist buildings across India. They show a desire to go back to the craft traditions in India and re interpret those traditions. This reinforces ancient knowledge in the contemporary architectural scenario, hence exemplifying the term ‘ancient futures’.

I find it hard to imagine a future which is disconnected from the past. To me, the future lies in not discarding the ancient theories, but in re-inventing them for the preservation of the indigenous. ‘Ancient futures’, ‘Back to the future’, ‘neo-traditional’ are such terms that are being increasingly bought into practice in all fields of design and Interior architecture in particular should make full utilisation of the rich source pool that crafts have on offer to re-define the future.

Rishav Jain graduated in Interior Design with a gold medal, from Apeejay College of Fine Arts, Jalandhar in India. He is currently doing a research on , ‘Identifying the Position of Crafts in Interior Architecture: Post 1990, a case of Indian interior architecture’, as a part of his Masters in Interior Architecture and Design (MIAD) with a specialization in Crafts and Technology at CEPT University, Ahmedabad. Alongside his Masters, he works as a Researcher with Design Innovation and Craft Resource Centre, CEPT Ahmedabad. He is deeply interested in the crafts; simultaneously cutting edge technologies intrigue him. He is also involved in design research and writing

Rishav Jain is currently doing a research on, “Identifying the Position of Crafts in Interior Architecture: Post 1990, a case of Indian interior architecture”, as a part of his Masters in Interior Architecture and Design (MIAD) with a specialization in Crafts and Technology at CEPT University, Ahmedabad. Alongside his Masters, he works as a Researcher with Design Innovation and Craft Resource Centre, CEPT Ahmedabad. He graduated in Interior Design with a gold medal, from Apeejay College of Fine Arts, Jalandhar in India. He is deeply interested in the crafts; simultaneously cutting edge technologies intrigue him. He is also involved in design research and writing. He writes for magazines, and various on line forums, where his discussions revolve around craft and design today. View all posts by Rishav