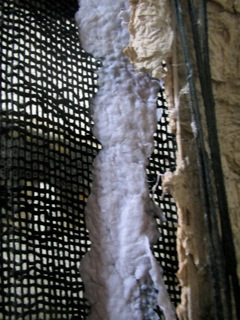 Priya Ravish Mehra is an influential figure in the Indian craft scene. For many years she has worked with traditional darners – ‘rafoogars’ – from her home town of Najibabad. In 2006, she brought out two rafoogars to Melbourne for the Commonwealth Games cultural festival, where they were the subject of great fascination as experts in what was once a very popular domestic craft. In Delhi she has also established an artists residency, which hosted the first designer in residence for the Sangam Project.

Now she has produced her own work for exhibition at Alliance Francaise  titled An exploration with textiles and thread, curated by Julia Libertad. She has created a unique series of work combining fibre and textiles using a technique she developed in collaboration of Anupam Chakraborty of Nirupama Academy of Handmade Paper in Kolkata.

Here she speaks about the connection between her work and the rafoogars:

My research documented the skills and sociology of the rafoogars, but also provided a chance to personally assimilate various aspects of darning as a powerful metaphor – to understand ‘repair’ as a vital modality of self-learning, and to experience the place, significance and act of visible and invisible ‘darning’ in the fabric of life, as well as in the life of a fabric.

In these mixed-media works my conceptual and symbolic focus is on impermanence, transience, rupture, attrition, and the internal relationships of these processes. This focus is equally on the fact that anything injured, harmed, disfigured and abraded has the potential to be restored and maintained, given fresh value and energy, new meaning and use.

The ‘Rafoogar’ does her magic of invisible, and when required, of visible ‘Rafoogiri’ to impart new ways of relating and opening up new ways of seeing, that which seemed till a while ago very obvious. Priya’s journey of walking purposefully into the future, assimilating all her rich tapestry of experiences into her art explorations as a ‘Process’, is transparent and very organic. This ‘Meta-narrative’ is what gives energy to her art, and also gives its conversation with her audience immediacy of meaning and resonance. She reveals the growth and shares the underpinnings in all its details of this inquiry, which has become her way, her path that she treads questioningly, inquisitively and joyfully. The Buddha’s robe was made of scraps collected as alms, washed and lovingly put together as a form of blessing. This exhibit is the essence of Priya’s approach to her art.

And finally Priya’s artist statement connects this back to the universal human condition:

Human life is an intimate reflection of the cycles of nature, universal, perennial and all-pervasive. Of greatest significance to us are the sun and moon in their fixed paths across the sky, linked to the arrival, change and departure of the seasons – all existence on earth depends upon this eternal, unstoppable and regular movement that is a manifestation of the cosmic order. Darkness veils light; light infuses darkness; through increasingly refined gradations of luminosity the gross becomes subtle and density becomes transparency, and the reverse. My current works are based on ‘Life Cycle’ an ongoing stage of my personal journey, expressed and revealed by visible and invisible darning in the once-reliable order of things. The edges of gashes and fissures in the vulnerable fabric have to be continuously aligned, firmly yet delicately gripped, and sealed stitch by careful stitch to prevent further ripping and other damage, and to render the cloth intact and whole.

A sample of the works: