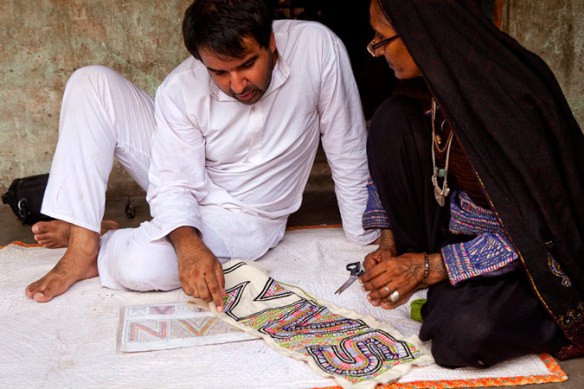 A few months ago, I found out about the Australia India Design Platform. This platform is meant to act as a catalyst for creative partnership between the two countries. I was contacted to give a name and identity to this three year program on craft and design.

After much thought and consultation, we settled on the name ‘sangam’, which means confluence. Sangam typically refers to the confluence of the two great Indian rivers — Ganga and Yamuna. In this case, it would stand for the confluence of Craft and Design and of Australia and India.

We determined that the visual manifestation of Sangam should be a metaphor of its very definition, i.e.confluence. We decided to take inspiration from an existing craft and base the typography on that, after which we could work with an artisan in the same medium we took inspiration from. They would then create their version based on our design, with room for interpretation.

We created several variations of the word Sangam,based on the myriad forms of embroidery in Kachchh such as Soof, Kharek, Ahir and Rabari.

We ultimately decided to go with the Dhebaria Rabaristyle of embroidery and patchwork since it is more free flowing than many of the other embroidery techniques.Since I know Judy Frater, I decided to work at Kala Raksha in Kachchh. She had suggested a Rabari embroiderer for the project.

A few hours after my arrival in Kachchh, I met Sajnuben, a Dhebaria Rabari from Lodai and currently living in Kukadsar in southern Kachchh. She had learnt embroidery from her mother and is a graduate of the Kala Raksha Vidyalaya. Sajnuben realizes the importance of her craft to her culture and is keen to pass her knowledge, to her two school going daughters. Embroidery or bharat kaam as it is called in Kachchh, is only done by women in the Rabari community. It is a way of life for Rabari women — who spend days making apiece of garment for their own dowry, or once married— for their husbands and children.

Over the next week, Sajnuben and I worked together to understand how to translate the design for ‘Sangam’ that I had conceived on the computer into her medium of embroidery and applique. Sajnuben said she had never embroidered letters and I mentioned that I had never worked on such a project with an artisan. Neither of us spoke each other’s language, but through gestures and laughter, we made ourselves understood.

While the letters were to be embroidered according to our design, I gave Sajnuben total freedom, to design the spaces between the letters as well as in the counters inside the letters, in her own style — so that she would feel a sense of ownership towards the design.

I also explained the concept of using the word, sangam,and how she and I were creating ‘sangam’ through the confluence of both our skills. She found this quite interesting.

We never discussed fees or deadlines, since I wanted both our attention to be only on the work. The fee was decided by Judy, after the embroidery work was over. I agreed to the amount, since I found it reasonable considering the amount of work done by Sajnuben.

More recently, I received a package in a cloth bag, from Kachchh. It contained the work done by Sanjuben and‘our sangam’ was complete.

This was a very fulfilling project and I am thankful the organisers for involving me in Sangam. This is just the beginning of the Sangam project. I wish Sangam all the best for the next three years and beyond. Happy collaborations.

—Ishan Khosla (you can read more about this project here)